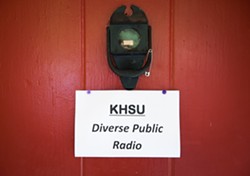 The dead air you’ve been hearing on KHSU is the result of a ransomeware attack that disabled most of the station’s programming systems and storage servers, according to Humboldt State University.

A university spokesperson tells the Journal the university does not yet know whether the cyber attack on the station was the result of a broader fishing effort, a targeted ransom attack or an act of sabotage potentially carried out by someone upset with the university’s decision to eliminate the vast majority of the station’s staff and local programming back in April.

According to a press release, the servers affected by the attack did not house sensitive information and while these kinds of malware attacks often come with a ransom request, the university has not “received a specific payment demand.”

Noting that KHSU is federally licensed, the university press release notes the incident was reported to federal law enforcement and the Federal Communications Commission.

In the meantime, KHSU programming — which has consisted of feeds from affiliates in Sacramento and Chico since the station’s gutting — continues to be interrupted.

“The university hopes to have this resolved as soon as possible as it rebuilds programming and improves the security of KHSU,” the press release states.

KHSU’s recent computer problems are the result of a ransomware attack. The incident disabled most of the station’s programming systems and all storage servers, which didn’t house sensitive information. As a result, regular programming continues to be interrupted.
Ransomware is a form of extortion that blocks access to files and threatens to reveal data unless a ransom is paid. Humboldt State has not received a specific payment demand and isn’t aware of who may be responsible for the attack.
Because KHSU is a federally licensed facility, the incident was reported to federal law enforcement and the Federal Communications Commission.

KHSU programming has been interrupted since the station began
experiencing computer problems on July 1.
The attack exploited a vulnerability in KHSU’s system. The University is grateful to its partners who are assisting the station. Capital Public Radio at CSU Sacramento is helping to restore KSHU programming and North State Public Radio at CSU Chico is airing its programming on KHSU.
The University hopes to have this resolved as soon as possible as it rebuilds programming and improves the security of KHSU.
********

July 3, 2019: Computer problems at KHSU are expected to take one week to resolve, and in the meantime, there may be interruptions to the broadcast. Our partners in Chico are assisting us.

July 2, 2019: KHSU FM has been experiencing computer issues. Humboldt State University is working with its partners to remedy the situation, during which time regular programming may be interrupted.