Charmaine Lawson Calls on Witnesses to 'Do the Right Thing'

Standing before about 150 people who turned out to support her on Saturday to mark the fourth anniversary of her son’s killing, Charmaine Lawson delivered a simple plea.

“To get a phone call that your child was viciously taken? That’s hard. It’s hard,” she said, recalling the morning she learned her 19-year-old son David Josiah Lawson had been fatally stabbed at an Arcata house party. “And you have to go identify your child’s body? That’s hard. You have to pick out a casket? It’s hard. It is the hardest thing you’ll have to do. And I only say that because I need the person responsible for my son’s murder to come forward. I need people who were at the party that night and saw what happened to come forward. Do the right thing. Just do the right thing.” 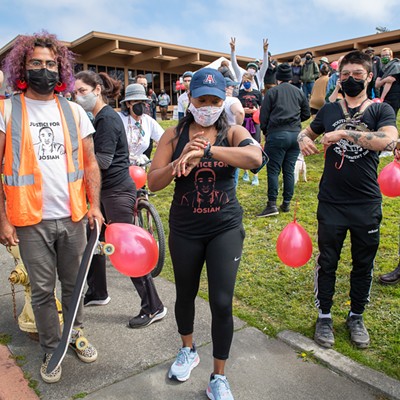 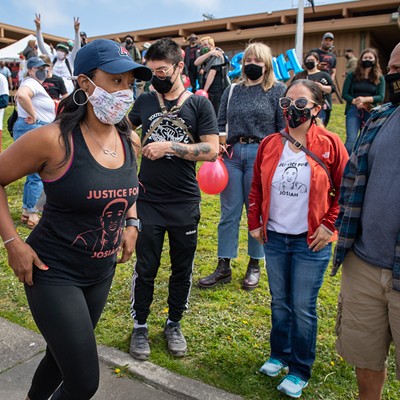 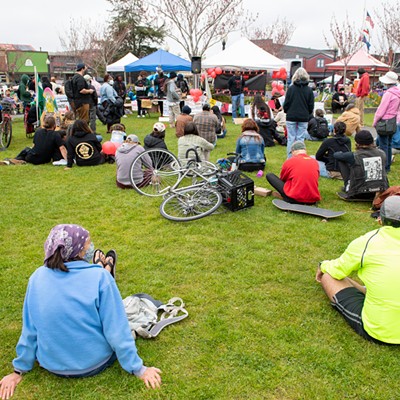 Lawson Four Year Anniversary
By Thadeus Greenson
Click to View 17 slides
In last week’s Journal, Charmaine Lawson announced that she is temporarily increasing the cash reward to $100,000 for anyone who comes forward before May 20 with information that leads to the arrest and conviction of her son’s killer. Andre Ramos, a family friend, explained to the crowd Saturday that the money is intended to entice or enable witnesses to come forward, explaining that the money would allow someone who fears for their safety to move out of Humboldt County and start a new life somewhere else after telling police what they know.

Arcata Police Chief Brian Ahearn said his department’s primary focus in the investigation right now is on finding witnesses, saying police have what is believed to be the murder weapon, as well as some DNA and other physical evidence.

“What we need are witnesses to corroborate that evidence,” he said, adding that investigators want to talk to every single person who was at the off-campus party the night of April 14, 2017 into the morning hours the following day, even if they don’t believe they saw anything important or left hours before Lawson’s stabbing. “There’s a lot of people who have information and data points that will contribute to the fact pattern as a whole.”

Ahearn said APD’s anonymous 24/7 tip line can be reached at 825-2590 and that he understands people need to “come forward in a way that’s comfortable for them.”

“We understand that people have been traumatized by this event,” he said. “but APD’s goal is not just to get the case back in court. Our goal is a convict. We want justice for Josiah. We stand in solidarity with Charmaine.”

Saturday’s event began with a 4-mile run and walk from Arcata City Hall down to the Humboldt Bay Trail, which Charmaine said was in honor of her son’s love of exercise and the outdoors.

“Each mile was a mile for DJ,” explained Ramos, “or the years it’s been since he was murdered, the four years we’ve waited for justice.”

Ramos said it’s important for the community — and witnesses — to understand that Charmaine Lawson is still grieving and looking for closure that the case’s remaining open doesn’t allow. She checks her email daily, he says, hoping for progress.

“She’s checking to see if today’s the day when the chief calls and says, ‘Today’s the day. We’ve found the witness, we’ve made an arrest,’” he said before urging those in attendance “go back to helping one another, supporting one another.”

Sadie Shelmire, a 14-year-old Arcata resident, told the crowd of her experiences of racism in the local community, starting when a kindergarten classmate said her skin looked like “poop” and progressing until a fourth grade classmate called her a racial slur. But Shelmire said she doesn’t blame the kids — she blames their parents. She urged parents to educate themselves first, then their kids.

“Teach your kids to be anti-racist,” she said.

Leonard Perry, the event’s keynote speaker, gave the crowd a brief explanation of the night Lawson was stabbed, saying he and his friends were accused by Lila Ortega — who he described as “a racist monster of a woman who I had the dissatisfaction of going to high school with” — of stealing her cell phone, which she later found. When Ortega’s boyfriend, Kyle Zoellner, arrived to pick up her and her friends, he asked Lawson and his friends about the missing phone and a series of fights broke out, which led to Lawson’s stabbing.

Police arrested Zoellner at the scene and he was charged with murder but a Humboldt County Superior Court judge dismissed the case weeks later, saying prosecutors hadn’t presented enough evidence to hold Zoellner to stand trial.

Quoting Tom Parker, a former FBI agent who was brought in to consult Arcata Police on the investigation but later resigned in frustration, Perry said police demonstrated a “lack of will” in the investigation, which from the outset was fraught with errors and missteps.

Perry urged those in attendance to stand up for justice, saying it doesn’t need any specialized training or knowledge, only “a beating heart and a conscience that knows the value of one.”

When Charmaine Lawson spoke toward the end of the vigil, she said it’s the simple things she misses most about her son — his phone calls to check in on her, to wish her a happy Mother’s Day or birthday.

“I miss hearing DJ’s voice,” she said. “I don’t get any of that back. Cherish your children you guys because they could be stolen in a minute, in a moment.”

As the vigil came to a close, Charmaine Lawson called family and friends to stand with her, thanking for their support and saying, “You keep me going. Your strength has strengthened me.”

Standing in the same spot about an hour earlier, Perry marveled at the day's gathering, which saw backpacks with blankets and hygiene supplies distributed to the homeless, food given to those in need and gift cards handed out to students, as a diverse group of people came together to make sure David Josiah Lawson is not forgotten, that Charmaine Lawson is supported and that the fight for justice continues.

“This is what community looks like,” he said. “I think DJ would be proud.”