November 15, 2022
comment
The quesabirria taco has Mexican food enthusiasts happily in its grip, all of us grinning orange oil-slicked smiles now that the Tijuana specialty has made it this far north. But while dunking your way through an order of the crispy, gooey, beef tacos with a side of deep red consommé goes by all too quickly, the journey from pot to plate is a long one.

According to Gabriela Patino, who works with her mother, Beatriz Cruz, and father, Rodrigo Patino, in Patino’s Mexican Food truck (4050 Broadway, Eureka), Cruz starts by marinating the beef over night before slowly simmering it with spices over low heat for three to four hours. That process takes around 14 hours before she’s tossed a single corn tortilla on the grill. Once the tortillas are cooking, they get a splash of the rich, fatty broth from cooking the beef, which lends the tacos a bubbly, crispy texture. Then Cruz adds Monterey jack cheese, a scoop of the shredded beef, and a sprinkling of cilantro and chopped white onion before flipping the tacos closed. 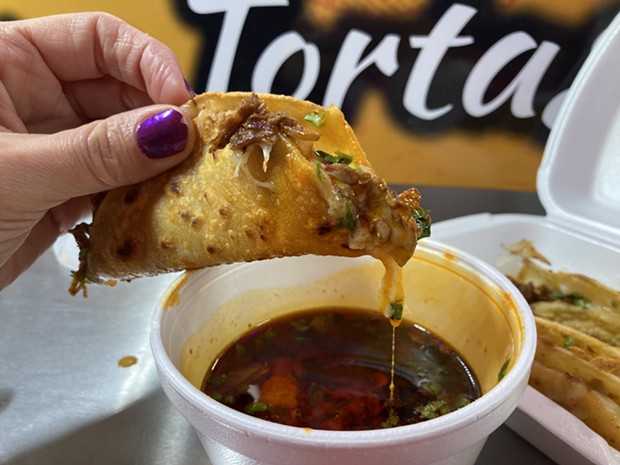 An order of quesabirria comes with four of the tacos, oozing with melted cheese, edges browned on the grill, with improbably tender meat inside. A plunge in the consommé (possibly scooping up a glistening morsel of fat) adds to the juiciness and stewy flavor, and a squeeze of lime cuts the richness and sharpens the flavors from the marinade.

“I always grew up eating them and it always has been a tradition for my brothers’ and my birthdays,” says Gabriela, whose mother and father were born in Mexico City and Guanajuato, Mexico, respectively, and moved to Humboldt more than 25 years ago. Cruz has been working in restaurant kitchens as well as her own for years, starting with the now defunct Rico’s Tacos, Rita’s Café, Fiesta Grill and Tacos El Pueblo. “My mom has been working in the kitchen for a really, really long time and she thought it was time to start her own business,” says Gabriela. In January of this year, that’s what the family did.

The Patino’s truck is parked by Pierson’s Building Center daily from 10 a.m. to 8 p.m., drawing a steady crowd for its classic Mexican truck menu, as well as dollar street tacos on Tuesdays, Fridays and Sundays. The homemade menudo soup with tripe is a recent addition to weekend offerings and, so far, it’s selling out, so show up early.

Editor's note: This post has been updated to correct the days for $1 tacos.