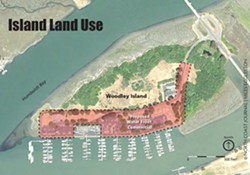 The Eureka Planning Commission has recommended that the city not change its zoning of Woodley Island, as the Humboldt Bay Harbor, Recreation and Conservation District recently requested.

The city is in the process of updating its general plan, a process that Community Development Director Rob Holmlund says will take another year or so. In doing so, the city is establishing a vision for areas around town, and will enact zoning codes accordingly. The Planning Commission will review proposed zoning changes, and city staff will make recommendations to the council by next year.

That could mean nothing changes, which is what the Planning Commission recommended for Woodley Island at its Oct. 12 meeting. The Harbor District wants to loosen zoning on certain areas of the island to waterfront commercial, allowing more types of businesses on the island. Meanwhile, the Humboldt Fishermen’s Marketing Association has asked the city to impose stricter regulations that would make the island more exclusive to the fishing industry.

HFMA Vice President Ken Bates said he was glad to have an opportunity to present, alongside the Harbor District, to the planning commission, and said much of the public attending the meeting opposed the Harbor District’s proposed land use change. Bates has garnered support for the fishing industry for several years since his association proposed amendments to Woodley Island's zoning. Among those amendments are the removal of language allowing recreational boat launching as a principally permitted use, a prohibition of additional restaurants, and adding direct "boat-to-public" sales as a principally permitted use.

Any decisions are far from being made, Holmlund said. “It’s not a big controversy,” he said, “More of a dialogue that’s happening between interested stakeholders.”