Bullock Sentenced to Life Without Parole for Priest's Slaying 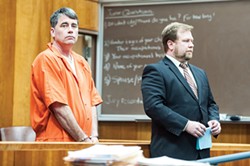 Multiple media outlets are reporting that Gary Lee Bullock has been sentenced to life in prison without the possibility of parole for the Jan. 1, 2014 murder of St. Bernard’s Catholic Church pastor Eric Freed.

A jury convicted Bullock, 46, of Redway, last month of a host of charges, including first degree murder, torture, residential burglary, carjacking and attempted arson stemming from the slaying of Freed in the St. Bernard’s church rectory, a killing that rocked the local community and captured international headlines. In a surprise move to all — including his own attorney — Bullock withdrew his not guilty by reason of insanity plea shortly after the verdicts, apparently resigning himself to spending the rest of his life in a state prison.

See past Journal coverage of the Bullock trial here, and for more on insanity cases in general, see our March 31 cover story, “Sanity on Trial.” And, for more on today’s sentencing and Bullock’s trial, see Ryan Burns’ coverage in the Lost Coast Outpost here.