A federal jury in McKinleyville this afternoon awarded $2.5 million in damages to the family of a man who died at the Humboldt County jail in 2014, finding three correctional officers acted negligently when they failed to properly screen him before putting him in a sobering cell.

The jury also found that the county failed to adequately train the three officers, who the jury determined did not act with malice or a conscious disregard for human life. Having sat through four and a half days of testimony and argument in the case, the jury of six men and two women deliberated for about 10 hours before arriving at its unanimous verdict.

Daren Ethan Borges, 42, was homeless, schizophrenic and living in Eureka at the time of his June 13, 2014 arrest on suspicion of public intoxication. Eureka Police officers arrested him at about 2:15 p.m. near the corner of Seventh and D streets, and booked him into the jail at about 2:40 p.m. Correctional officers placed Borges alone in a sobering cell, where he was found unresponsive at about 4 p.m. About 20 minutes later, he was pronounced dead at a local hospital. 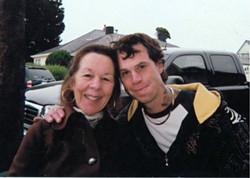 Brought on behalf of Borges’ mother, Stephany Borges, and filed by Southern California attorneys Dale Galipo and John Fattahi, the federal civil rights lawsuit initially named the county of Humboldt, city of Eureka, individual officers with both agencies and the California Forensic Medical Group, Inc., which handles medical services at the jail on a contract basis, as defendants. But U.S. District Court Judge Yvonne Gonzalez Rogers dismissed the case against Eureka and its officers, and Galipo said California Forensic Medical Group agreed to settle its portion of the case for $250,000. The county, Galipo said, did not make a settlement offer in the case.

That left the county, former Sheriff Mike Downey and four correctional officers — Tim Hershberger, David Swim, Terri Bittner and Tim Hammer — as the only defendants in the suit when it went to trial Aug. 21.

During closing arguments Friday, Galipo argued that the correctional officers, whom he said the county had failed to adequately train, didn’t follow policy and acted negligently when they rushed Borges through the booking process — despite his being disoriented, incoherent and obviously intoxicated — and placed him in a sobering cell instead of summoning a registered nurse to medically screen him. Had they summoned the nurse, Galipo argued, they would have learned Borges was in the midst of a medical emergency brought on by his consumption of a potentially lethal dose of methamphetamine, and taken him to the hospital, which likely would have saved his life.

In her closing argument, Nancy Delaney, who represented the county in the suit, countered that the correctional officers did everything they could and that Borges appeared aware of his surroundings and coherent when he was booked into custody. And, she pointed out, a nurse came and checked on him through his cell window about 20 minutes after he was booked, and saw no reason for alarm. Borges’ death was “tragic and sad” she said, but unpreventable after he ingested a lethal dose of methamphetamine.

The jury apparently disagreed, finding that Hammer, Swim and Bittner acted negligently — and without proper training — when they admitted Borges into the jail without getting him medically screened and treated. However, the jury did not find Hershberger, the other officers’ supervisor that day, acted negligently and rejected a charge that Downey was also responsible for disregarding a known training deficiency.

After the hearing, Delaney said she was pleased the jury found that none of the defendants acted with malicious intent but disappointed she wasn’t better able to communicate her case to the jury. She also said the case is likely to see a flurry of post-trial motions. In fact, Delaney has already filed one motion to dismiss the case against her clients and has informed the court of her intent to file a motion seeking to vacate today’s verdict, with both arguing that the verdicts are not supported by evidence.

While setting a briefing schedule for Delaney’s motions, the judge made clear Delaney faces an up hill battle on both.

“Let’s just be clear,” Gonzalez Rogers said, “the evidence was pretty substantial in a variety of ways — as I’ve said before — so the likelihood I’m going to overturn a verdict is pretty low.”

Galipo and Fattahi, meanwhile, indicated to the court that they will be moving to have the county pay their fees and costs, as they are entitled to do in a civil rights lawsuit. While it’s unclear what the attorneys will request, such fees and costs typically run high for a wrongful death case that’s now been in litigation for more than 30 months. Reached after the hearing, Galipo said only that their request will be a “substantial number.”

Immediately after the verdict, Galipo praised the jury for taking the case seriously and valuing the life of a man who was clearly lost and in distress and, at the time of his death,  addicted, mentally ill and homeless.

Editor's note: An earlier version of this story indicated a more thorough report would follow on Aug. 29. For a variety of reasons, we have decided to change course but readers can expect a more thorough examination of the case to follow in the future.