The Stars in Motion and Thoughts on Geotagging

A photograph can be worth many more than a thousand words. It’s an old expression, though, and maybe the number “one thousand” just isn’t what it used to be. But you’ll be happy to know that I’ll spare you the full count today and just touch on a couple thoughts about locations, both in the sky and here on Earth.

Do you expect to find the Milky Way in the sky when you go out to a dark place to star gaze? You’d find it stretching across the sky all summer, but in winter when Earth’s night side faces the opposite direction we can lose sight of its magnificence — the star field we see at night changes throughout the year. The stars all maintain their positions relative to each other, but our viewing angle of the cosmos changes a little each day as we orbit the sun; in half a year Earth’s night side will be facing the opposite direction from now, and in a full year we will again have the same view as tonight. 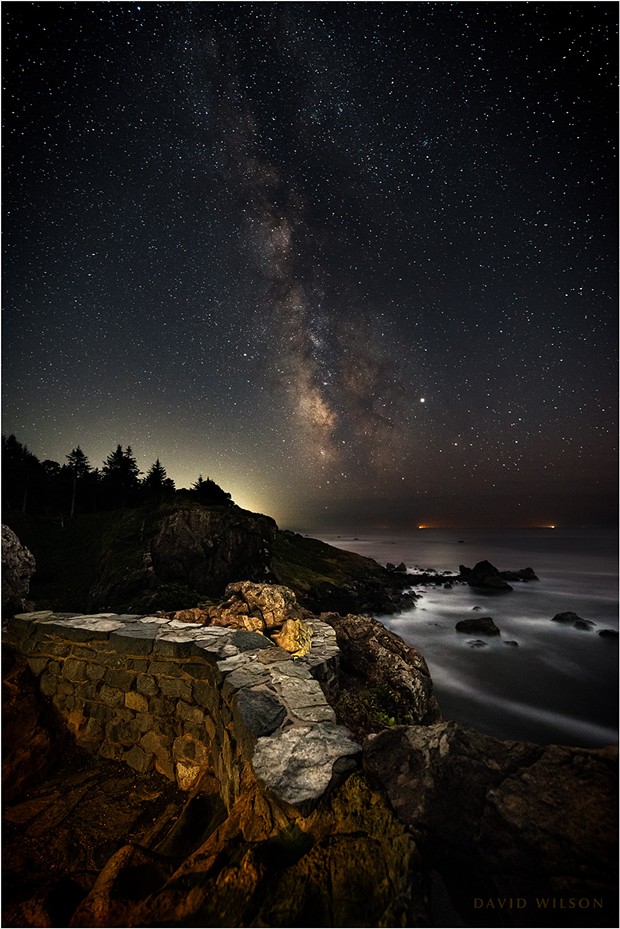 What’s never the same is the position of the planets in our solar system. They’re relatively near to us, and because they travel about the sun in their own orbits we see their positions change gradually against the fixed stars of the rest of the galaxy.

During the 2019 Milky Way season, the Milky Way has been straddled by Jupiter and Saturn. I am writing this in late September, and since March the two planets have slid a bit to the right relative to the Milky Way; earlier in the year Jupiter was just inside of it and Saturn was a little farther from it. In 2018, Mars was near the Milky Way all summer and Saturn was deep inside it.
Photographing at night has made me more aware of the motion of objects in the night sky. The sky changes almost imperceptibly each night, and different parts change at different rates: The stars all move together, but the planets change their place against the stars gradually as they move in their own orbits around the sun. The speedy moon appears each night with a different shape and in a different position. All of this helps make the night interesting to photograph.

Meanwhile back on Earth, some thoughts on sharing precise location information on social media. When we share images online, how specific should we be about the locations where we took the photographs? As a photographer, I pay attention to the interesting images of others. There are some places I’ve seen in photographs online so many times that I no longer have any interest in going there myself. Some locations I see photographed all the time. I wouldn’t feel unique to go make nearly the same photo I’ve seen a hundred other times. I dislike being part of a trend and would rather find less traveled places to photograph. I understand the draw to capture for yourself something beautiful that you have seen before; but I can reach a point where it pushes me away instead. Remember, there is power in uniqueness. Find interesting light and you can make an interesting photo.

But there’s a larger issue about sharing locations too precisely, called geotagging: If your image is compelling, through the power of social media you can inadvertently send large numbers of people to the same location by geotagging it in your post. People see the pin on the map and can go directly to the spot. The problem isn’t that it leads to thousands of similar images, but that it can have a terrible physical impact on the location itself. Places have been ruined by crowds wanting their own similar pictures of sites they’ve been seeing online.

An alternative to tagging a specific location is to tag an area, region, or park in general. A lot of areas, ours included, rely to some extent on tourism income. Parks are made for visitors. I do not know the perfect solution, but my thinking at the moment is that it is preferable to tag the park or region generally rather than tagging a specific spot in that area. Sharing beautiful photos tagged with the general area will still help bring tourism dollars into the parks and communities around them. It brings tourists to the area, and from there they can find their own special places.

I encourage all of us photographers to consider the impacts of our geotagging, and instead to tag more general areas, regions or parks when we post our special images. It can still bring tourist dollars into the area, while not focusing the crowds’ impact on specific spots.