Arcata Police Chief Tom Chapman is asking for patience as his department continues to investigate the killing of of a Humboldt State University student last April.

“It’s frustrating for people that nobody’s in custody and it seems like nothing’s happening, but that’s far from the truth,” Chapman says. “A lot of things have happened in this investigation that I would consider to be solid progress in figuring out what happened that night … The case will remain open until we get to a conclusion and, of course, our hope and everybody’s hope is that conclusion is the arrest and conviction of the person responsible. But it’s going to be a long road. There’s not going to be a quick arrest.”

David Josiah Lawson, 19, was stabbed multiple times during an altercation at an off-campus party shortly after 3 a.m. on April 15. Police arrived within minutes to find an unruly scene with a distraught crowd of 100 or so partygoers crammed in a small cul-de-sac. Some of those in the crowd identified Kyle Christopher Zoellner, a 23-year-old who sat beaten and bloody, slumped in a nearby yard, as Lawson’s killer.

Zoellner was arrested at the scene and charged with Lawson’s murder, but police and prosecutors failed to present enough evidence for a judge to hold Zoellner to stand trial on the charge. The five-day preliminary hearing saw 17 witnesses take the stand but many offered inconsistent and conflicting testimony. No one claimed to have actually seen the fatal stabbing and at the time of the hearing, just 16 days after Lawson’s death, police were unable to have physical evidence in the case forensically tested, leaving them with nothing to connect Zoellner to a 10-inch kitchen knife  that police found at the scene and believe was used in the fatal stabbing.

In the aftermath of a judge’s ordering Zoellner released from custody, tensions have run high. There was a string of protests by Lawson supporters, some of whom believe the stabbing may have been racially motivated, as Lawson was black and Zoellner is white, and the case kicked off a larger dialogue on race and racial tensions in Humboldt County. Others, meanwhile, have pushed for the arrest and prosecution of a group of Lawson’s friends — most of whom are black — that allegedly beat Zoellner badly on the night of the stabbing.

There is nothing preventing prosecutors from refiling charges against Zoellner, but that seems likely to hinge on forensic evidence in the case that’s being tested by the California Department of Justice crime lab, a notoriously slow processes. The knife found at the scene had one visible fingerprint on it — a print that didn’t match Zoellner’s — but is being tested for latent prints not visible to the naked eye. The clothes Zoellenr was wearing that night also have blood stains that are undergoing DNA analysis in an effort to determine if any of the blood found on Zoellner belonged to Lawson.

Chapman says the DOJ has returned some forensic testing results to the department, some of which is “very valuable,” but those for at least “one key piece of evidence” will necessitate further testing. Meanwhile, Chapman says his department has been able to identify several additional witnesses — some of whom he says have come forward reluctantly — and continues to try to interview people who were at the party that night.

“They’re peripheral witnesses,” Chapman says, adding that the goal is for police to speak to every single person who attended the party. “They’re loose ends that have to be tied up and are important to the investigation, so of course we need to interview them.”

Meanwhile, the department has also agreed to work with a private investigator, Tom Parker, a 73-year-old former FBI agent, who most notably led the bureau’s investigation of the Rodney King beating and of the Rampart scandal in the Los Angeles Police Department. Parker is offering his services pro-bono.

Chapman says Parker will have complete access to the full investigative file in Lawson’s case — allowing him to review all witness interviews, reports and physical evidence — in order to give APD feedback and advice. But Chapman says Parker has incredible experience and wouldn’t rule out the possibility of tapping him to do some field work on the case in the future if the need arises.

“Really, the idea was trying to find a fresh set of eyes, someone who’s reputable, experienced and has the skill set we can trust, someone who everyone is comfortable with,” Chapman says. 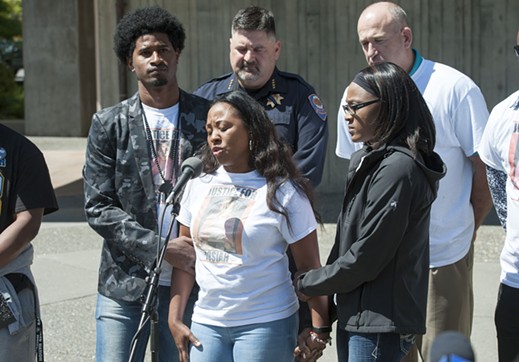 Chapman stresses that the investigation is progressing and pieces are falling into place.
“A homicide investigation is complex and it takes a lot of time,” he says. “They’re intensive cases that are very time consuming and oftentimes there’s no quick public answer, like an arrest. But that doesn’t mean that nothing is happening. A lot of progress has been made on this investigation and continues to be made, and I’m confident we’re going to keep making progress as time goes on.

“But it’s going to take a lot more time to complete this investigation and I just ask, as much as possible, for patience as we continue to work through the process.”

The Lawson family and the city continue to offer a combined $20,000 reward for information leading to the arrest and conviction of Lawson’s killer or killers. They ask that anyone with information about the case call 822-2428 during business hours or 822-2424 after hours or on weekends.