by Thadeus Greenson and Elaine Weinreb

An initial vote on a motion to accept the project stalled with a 3-3 vote, which prompted commission Chair Robert Morris to ask Terra-Gen's representative if he would be OK delaying the vote a couple of weeks until after the Thanksgiving holiday when the full commission would be available. The representative — Terra-Gen Senior Director for Wind Development Nathan Vajdos — replied that he wanted a clear answer then and there, prompting the vote on whether to deny the project. (Bongio, who had voted for the motion to accept the project, was the swing vote in denying it, but offered no explanation for the change.)

The proposal brought forward by Terra-Gen, a subsidiary of Energy Capital Partners, would see 47 600-foot wind turbines erected on the ridge lines, each placed on a large concrete platform. Proponents of the project conceded it would bring unavoidable environmental consequences but argued it would be an expedient local response to the global climate crisis, powering more than 40,000 homes with clean, renewable energy. In addition to the potential environmental benefits and impacts of the project, it promised to create hundreds of jobs during construction, as well as 15 permanent ones, while putting more than $2 million in tax revenue into county coffers. 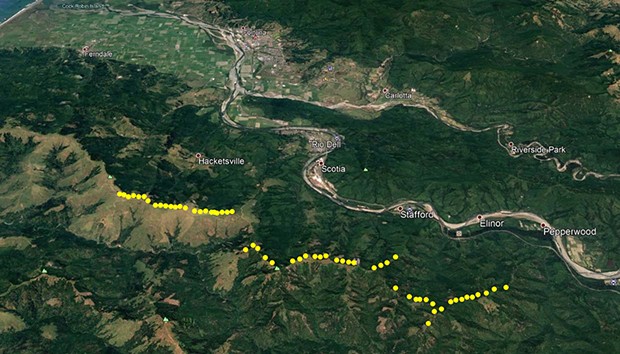 But opponents — including some environmental groups and the Wiyot Tribe — argued the environmental cost of the project was too much, clearing carbon-sequestering forests and prairies, harming vulnerable bird populations and forever altering a sacred Wiyot prayer site. At the Nov. 14 planning commission meeting, about a dozen members of the public spoke in support of the project while 54 opposed it.

After hearing more than five hours of public comment spread over three meetings, the planning commission voted the project down tonight, denying a conditional use permit application that would have paved the way for Terra-Gen to begin the process of securing the dozens of other permits needed to begin construction.